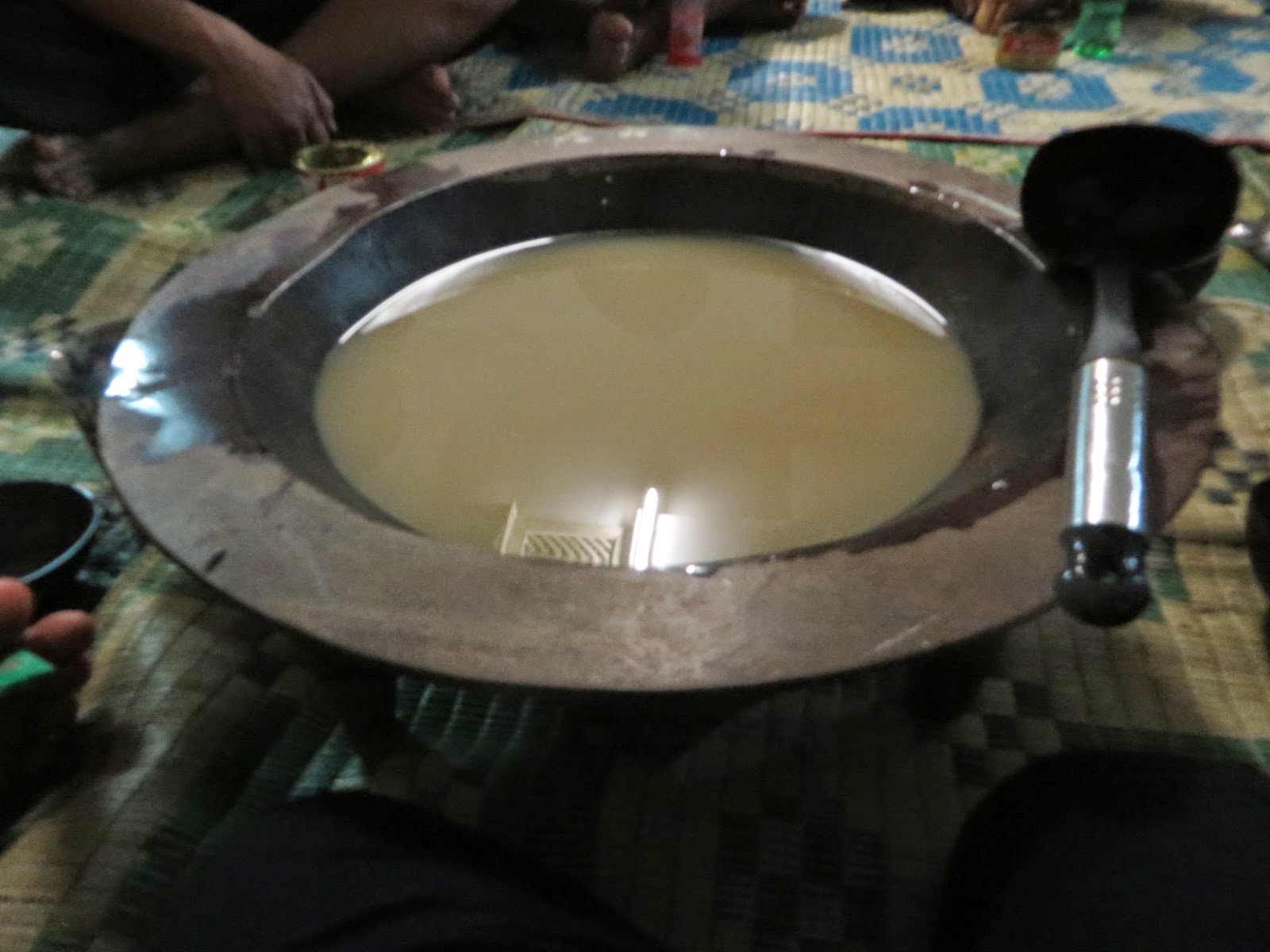 Judging by his ashy complexion and papery, wrinkled skin, the man sitting to my left was in his upper forties to early fifties. Whether he looked as much because of the natural wear-and-tear of increasing age, or because of too many nights spent gulping down countless bowls of Tongan kava, I have no idea.
He sat crossed legged, in a suit jacket and ta’ovala over a tupenu, his hair closely cropped, with his hand resting heavily on my thigh as he waited for me to serve him. Mumbling, he asked me in Tongan if it was okay for him to put his hand there, as if he hadn’t already been taking liberties with doing it anyway for the past 45 minutes. I grunted an abrupt “mm,” accompanied by a flick of my eyebrows in response, and hurried to complete my duties as a tou’a, emptying the ladleful of what looks more like muddied water than something anyone would actively seek to consume, into his coconut-shell kava bowl.
Even after five months living here, I maintain some degree of a very Western, maybe overly zealous appreciation for personal space.

The man lifted the bowl to drink and relieved my thigh of his presumptuous but respectfully non-drifting hand, which allowed my protective palangi bubble to re-inflate with don’t-touch-me vibes.


Albeit briefly. At least until the next time he decided he wanted a drink.
Following his lead, other men in the circle began to think my fully covered thighs required their devotion as well.
In truth, they didn’t, but this simple fact seemed to be lost on them.
I put up with it pretty good-naturedly until the teenager to my right made to assault my feet under the pretense of giving me a foot massage. Both incredibly ticklish and simultaneously unaware of the degree to which his advances derived from a place of innocent generosity or sexual deviance—while also just being straight up unprepared for that shit—I reflexively smacked his hands away and drew my feet back under me.
Yes, sitting side-saddle for six hours straight while serving a group of progressively drunken men a substance that cultural standards dictate I can’t even drink, does happen to make me lose all feeling in my hips, legs and toes; but no thank you, sir. Hands and feet inside the ride at all times, please.
After that minor incident the evening went along quite smoothly, with a mixed torrent of provocative winks, and lusty tongue flicks occasionally sauced up by slurping sounds.
Between discussions of chest and pubic hair and masturbation, endless sexual innuendos, pelvic thrusts and the unexpected surprise of opened man-skirts flashing suggestively in our directions, alternating kava circles in the hall would begin strumming guitars and ukuleles to the opening chords of traditional Tongan songs. The men would pause in their lewdness, their richly deep and voluminous voices rising and falling in spontaneous harmonization.

After a brief interval the previous conversations would pick up right where they left off.
At one point, in another PCV’s kava circle, one man said something so offensive to her that another man, a minister, grabbed the offender’s face in one hand and swung at it forcefully with the open palm of his other. She didn’t hear what the man had said. I can’t even begin to imagine what they were all saying that we weren’t catching due to our limited understanding of the Tongan language.
At 1 a.m., the guy who’d asked us to tou’a the kalapu signaled to us that we could leave. We made our way to the door, shaking hands as we passed between the scattered men, trying our best to anticipate and avoid those who would try to subject us to the non-so-secret Tongan handshake—a swift index-finger-to-palm scratch meant to signify that the perpetrator wishes to sneak off to the bush and have his/her way with you.
Among the four palangi tou’a (the other PCVs on ‘Eua and I), we accumulated approximately 57 marriage proposals and 34 offers to accompany us safely to our sparsely-populated homes. All in a night’s work.
Kicking butt. Taking names.


To be sure, not all faikava are so raunchy. I’ve been to others that are the opposite—spiritual and subdued—such as the ones before church where soft-spoken men sing hymns and join each other in prayer. There, as a tou’a and the only female, I am usually thanked for my service then left pretty much to myself.
Kava circles perform an important function in Tongan communities. Often they are organized to raise money, for example, for a church. They help to preserve a piece of traditional Tongan and South Pacific island culture that dates back to a period before the missionaries came. They are the men’s equivalent to the women’s weaving circles: a place to hang out and socialize with other men, swapping stories and talking about whatever it is guys talk about.

This blog covers my two-year tour serving as a Peace Corps Volunteer in the South Pacific Kingdom of Tonga. The stories and images published on this site reflect my personal experiences and opinions only. They do not reflect the viewpoints of the U.S. Government, Peace Corps or any other entity.